Welcome to the Frictionless Finance Report, our bi-weekly look at everything new in the world of Open Banking, FinTech and consumer experience. If you’d like to receive this in your inbox every other Wednesday, simply fill in the form at the bottom of the page. This week we examine the impact for the UK were the country to go cashless, the possibility of a coin offering from Facebook, and the implementation of Strong Customer Authentication as part of PSD2 regulations.

There's much to talk about in the Open Banking world as we look at some of the market trends from the beginning of 2019, what propositions can be developed that will broaden customer appeal, account aggregation from NatWest, mortgages from M&S Bank, and more.

As we move through the year, we continue to see a number of pieces on how Open Banking will act as a beneficiary to consumers, and is a recurring theme to watch out for in 2019. Alongside increasing digitisation, digital payments and financial service communities, International Banker has identified Open Banking as one of the key trends for this year, writing:

“Open APIs provide the missing link between digital-first FinTech organizations and traditional banks – helping the integration process between the two, and opening up new revenue streams for the bank and new services for consumers, even faster. We anticipate that open banking is only just in its infancy and will continue to develop as a crucial, competitive strategy for banks and fintechs alike.”

Writing in Finextra, Adyen have identified Open Banking as one of the four key trends for this year, correctly noting that it will offer consumers more competition and insights in their daily finances. This theme is taken up in AltFi who have written on the improvement in services that bank customers will soon see. In a slightly different vein, Verdict have given Open Banking an examination in the context of what the impact will be on businesses. They offer a comprehensive timeline of Open Banking, while also addressing some of the key themes such as Open APIs, AI and Big Data.

Now is the time for Open Banking

Banking Tech have an interesting proposition, writing that bank customers probably went through 2018 unaware of Open Banking, with only some limited applications such as account aggregation and work completed by the Challenger banks and FinTechs such as Emma, Yolt and Moneybox. To succeed, Open Banking requires innovation that links customers to financial propositions, illustrating savings in time and money.

EY have produced an in-depth review of Open Banking, noting that consumer sentiment is the biggest hurdle to overcome before widespread adoption. They conclude:

“Eventually, open banking should play an important socioeconomic role by helping more vulnerable, underbanked elements of UK society to access and navigate the financial markets. Open banking could be a way to more easily gather the necessary information to open a bank account or qualify for a loan, for example, or offer alternative methods of calculating lending risk. In other words, open banking could be more than just a way to push products, but a way to truly open opportunities for people and help guide good financial behavior.”

Based on research undertaken by KPMG, Akani have furnished us with 7 reasons why now is the time to become involved with Open Banking.

We now know that account aggregation has become the base product being offered by the banks in response to the introduction of Open Banking, and NatWest have become the most recent to jump on the bandwagon, offering integration with fifteen other banking providers. 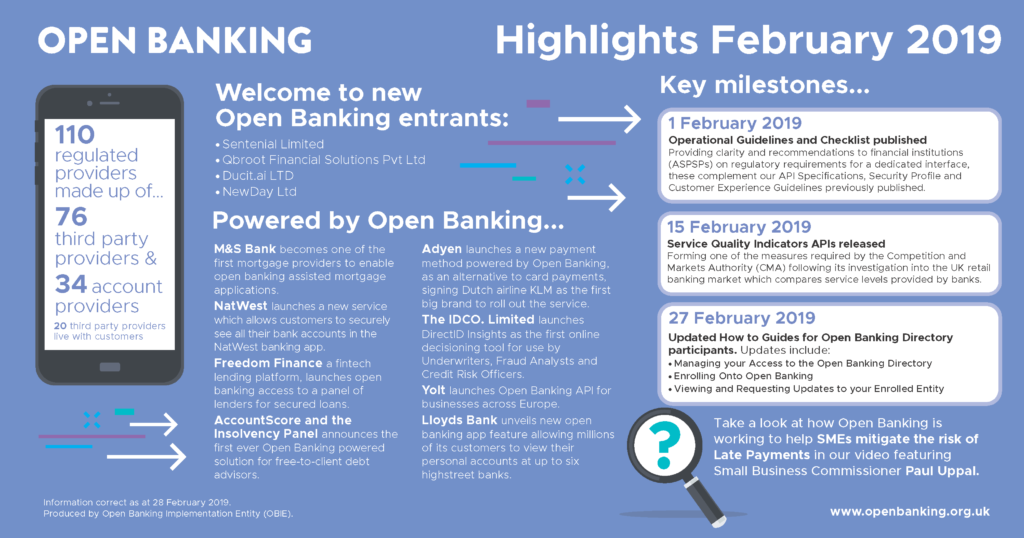 There has been a flurry of articles in response to the September deadline for the introduction of Strong Customer Authentication (SCA) under rules from the Second Payment Services Directive (PSD2). Under the new laws, online payments of more than EUR 30 (around £25) will require the use of two factor authentication (2FA). This will encompass something you are (biometrics), something you have (phone, tablet or device), and something you know (passwords or knowledge).

Both the Paypers and Compelo have focused on what this will mean for banks and consumers. Concerningly, the Telegraph has identified where the security has directly resulted in fraudulent activity. The paper has uncovered examples of verification codes being sent to customers then being intercepted by fraudsters who were able to use them to authorise fraudulent transactions.

We're well used to seeing news from New Zealand and Canada dominate these pages, and we're delighted to introduce news from South Korea this week also. The Asian states have been working tirelessly towards the introduction of Open Banking, and we look forward to seeing more news to accompany that from the Antipodes and North America.

Steve Boms, Executive Director of FDATA in North America, and a name we have cited frequently upon these pages, has written an article for Canadian readers extolling the virtues of Open Banking and what it could bring to Canadians. He writes:

“The first critical step toward Open Banking is the assertion of the customer’s legal right to their data. Many Canadians currently take paper statements and financial information to their advisors and accountants. Open Banking is the digitized version of bringing a shoebox filled with receipts and bank statements to service providers.”

South Korea’s financial regulator has announced plans for a Korean interbank payment network between banks and FinTechs. It is hoped that the creation of the network will help in the launch of Open Banking, which has been widely touted in the South Asian state. Further coverage can be found in the Korea Times, pymnts.com and FinTech Futures.

The country moves ever closer to the formal introduction of Open Banking with the launch of the first API technical standards for account service providers, and payment service providers. The trial was concluded by six parties comprising a mixture of banks and third parties. Coverage can be found in FinTech Futures and the New Zealand Herald.

We have a range of fascinating articles this week covering a plethora of different angles within the banking sector. There has been many different reactions to the lack of access to cash in the UK, and a report from Link does not bode well should it disappear altogether. The Tech versus bank argument will surely go on until the Judgement Day - but just in case, we bring you the latest. And we introduce the newest people's champion - not Martin Lewis, but the CMA.

If cash were to suddenly disappear, what impact would it have on you? According to new research from Link, 8m people in the UK would be adversely affected should it go. With cashpoints and bank branches closing on a daily basis, access to cash is fast becoming a political issue. Typically, those on lower incomes utilise cash more than the wealthy. Report author Natalie Ceeney said:

“There are worrying signs that our cash system is falling apart. ATM and bank branch closures are just the tip of the iceberg, underneath there is a huge infrastructure which is becoming increasingly unviable as cash use declines. In Sweden, we were repeatedly warned to plan now because once infrastructure had gone, putting it back was close to impossible. If we sleepwalk into a cashless society, millions will be left behind. We need to guarantee people’s right to access cash and ensure that they can still spend it.”

That said, the incentives for consumers in the UK to go cashless are currently not there, writes Chris Skinner on his blog. While there may be overarching incentives for African states to dispense with cash, at this time they do not exist in geographies such as Europe and the United States.

Will we write another Frictionless Finance Report without mentioning the apparent dissonance between technology companies and those working in financial tech? As things stand it seems unlikely. There has been a slew of articles over the last few weeks. The FT Adviser suggest that while the argument has been slanted towards the danger that the tech companies pose towards the banks, it should in fact, be the other way around. Trust in companies such as Facebook is declining, and this is an opportune moment for the banks to capitalise on that trust.

Moreover, while Facebook might be aware of what stories you like and share in your timeline, your bank knows who you use for utilities, your phone contract, how much you spend on takeaway, all much more valuable data. The article was released as Facebook released the results of a survey which showed that young people do not trust the internet. Facebook is the third largest website on the globe.

The FT Adviser article and Facebook survey raise interesting propositions which are dismissed in another article by FinancialPlanning. This states that both young people and those with a high net worth want more control over their investments, which could be offered by Google or Facebook. The author eventually concludes, that while a tech firm entering the market remains a possibility, it won’t happen in 2019 because of the high volume of regulations and finance being very sensitive to regulation.

New plans to beef up the power of the Competition and Markets Authority have been revealed. The plans, announced by Chairman, Andrew Tyrie, will see the watchdog become more of a consumer champion, and strengthen the hand of small businesses. Tyrie said:

“The UK is an excellent place to do business, one in which innovation and dynamic companies can thrive. But the growth of new and rapidly emerging forms of consumer detriment, partly caused by digitisation, and the public’s increasing doubt about whether markets work for their benefit, both now require a response.”

It was a successful night at the British Bank Awards recently as FinTech companies and Challenger Banks swept the prizes. Amongst the winners were Starling, Monzo, Freetrade, Zopa and Chip. News via AltFi and This is Money.

Is Facebook to launch a cryptocurrency? According to plans seen by some media outlets, discussions with crypto exchanges are at an advanced stage. While initially designed to be sent over WhatsApp, it is possible the coins will also be available for use on Messenger and Instagram.  The coin is set to be a “stablecoin”, that is, it is pegged to a fiat currency – possibly against a basket of currencies, not just the dollar. News can be found across a number of outlets, including Finextra, Business Insider, and the New York Times.

We’re continuing our work in helping all to understand Open Banking and the benefits it can bring and have now published the third in our series of articles – on why you can trust the security behind Open Banking. Watch out for the fourth on Open Banking across the globe, coming shortly. The three posts to date are:

We examine banks beginning to embrace digitisation, how APIs are critical for this to happen, and the continuing evolution of the bank-FinTech relationship

This month in the Frictionless Finance Report we examine the continued push towards a system of Open Finance, the impact on the financial system of a pandemic, and a big awards win for DirectID.

This month we examine the transition from Open Banking to Open Finance, the success of FinTech in the UK, and the importance of tech in UK banks.